Hearthstone: How To Kill Ragnaros the Firelord on Heroic

A couple of things in this fight seem fairly obvious, but then things quickly swing in the wrong direction and you find yourself overwhelmed with Molten Giants, which is not fun.

The Ragnaros fight starts with you facing Majordomo Executus who has an ability to summon a 3/3 for 2 mana, it’s pretty strong, but nothing that can’t be dealt with. The tricky part is bringing Executus low enough so that he doesn’t spam Molten Giants and then smashing him in the face so that he turns to Ragnaros and you still have enough on the board to finish him off.

The dream with this deck is to get out as many Khel’Thuzad’s as possible using Baron Rivendare, Reincarnate and Ancestral Spirit. Once you have a full board of Khel’Thuzad you can finish of Executus and Continue to Kill Ragnaros. His hero power deals 8 damage to two random enemies, with 4 or 5 Khel’Thuzad on the board, this is not a problem. To really hammer home the win you can try dropping some Stormwind Champions which boost your Khel’Thuzads and any other minions on the board too.

The second goal with this deck is to Duplicate Al’Akir the Windlord and Bloodlust Executus into Oblivion along with Ragnaros.

You have a couple of accelerators in this deck which are really important, Mana Tide Totem, Novice Engineer and Azure Drake. It’s important to keep these cards as they all help you to unleash a big wombo combo. You could switch out Ysera, but it’s nice to have a final backup on the board if you fail with Kel’Thuzad or Al’Akir.

Finishers come from your big creatures, Al’Akir, Khel’Thuzad and Stormwind Champions and Bloodlust. Take a look at the screenshot below to see Ragnaros meeting his end to a board of Khel’Thuzad. 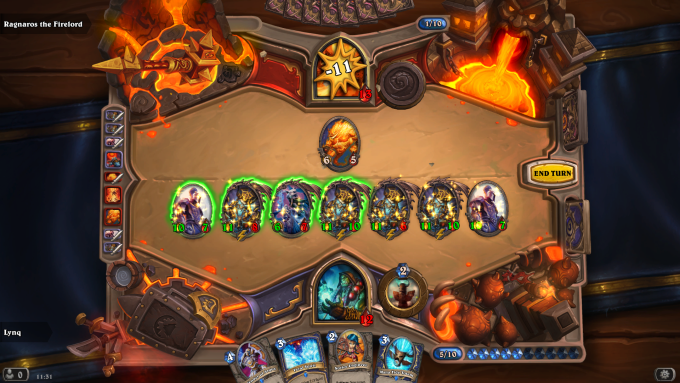 On heroic you won’t recieve any rewards until you have completed all of Blackrock Mountain heroic, then you will recieve a card back.